Okay, so here is my attempt to recreate, with a twist, a look that I believe was started by Nailasaurus. She initially did this with dark stripes over naked nails, inspired by a dress that had see-through stripes, if memory serves, and many others have been inspired by it since. I thought it would be fun to do a version of this with a sassy glitter as the undies. :)

I used Lucky 13 Bowties Are Cool as my base--but keep in mind that I only used one coat here with no undies because of the look I was going for. So don't judge this as a finished polish look for this polish! It's a gold-based glitter with orange-red hexes, brown small hexes, and lots of shimmer:


Then I put some strips of tape over in two patterns; one meant to look similar to the original style, and two diagonal nails for some contrast to create a skittle sort of look; then I painted over it with Pure Ice I'll Never Tell, a unique dark brown with silvery flakes: 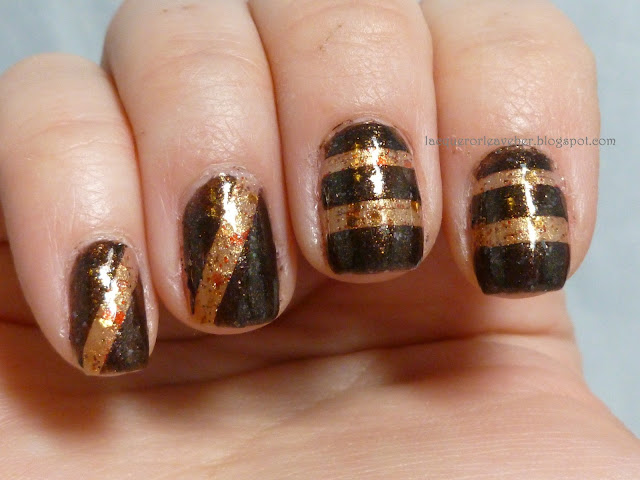 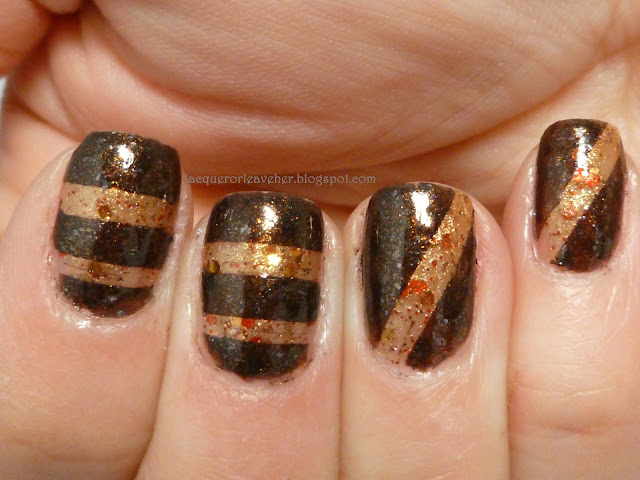 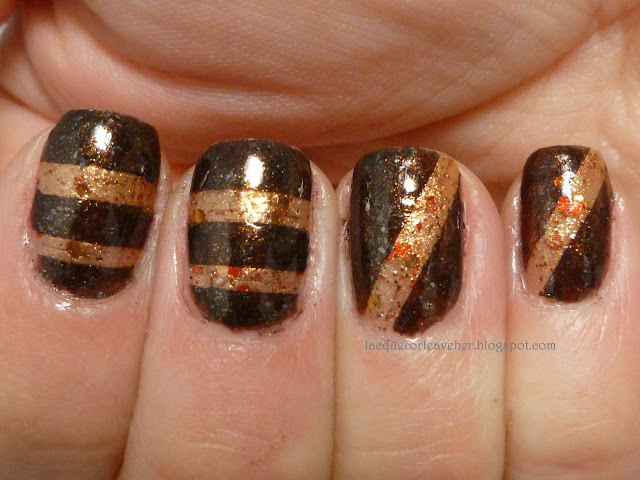 What do you think? I do love this color combination, and I love how the glitter comes through. However, you can tell I did this back when I was still using pointed q-tips for clean-up, before I got better at the acetone + brush method, and it's not as clean as I would like. Also, if you look closely (okay, you don't have to look *that* close to see it, lol), you can see I tried something that didn't quite work. To mask off my areas, I put two (or three in some cases) stripes of nail tape side-by-side, to get more width, and then I painted over everything. Unfortunately this led to very tiny micro bleeding between the lines of tape; this wasn't so obvious in real life as in these close pictures, but it's there. Next time I'll just cut regular tape to the sizes I want, or I won't pain over the entire nail area. :)

In these pictures, I'm not sure how I feel about this manicure, but in real life it looked better than it does here. I think that's because the flaws that are obvious in the pictures weren't so visible, and the effect was a little more even from a distance. I'll tell you this, I love Sam's work for tons of reasons, and one of them is the impressive precision she gets on things like her tape manis! It's not easy, but she sure makes it seem like it is. :)