I've had a few requests for comparison posts and dupe posts, and it's a good reminder that it's been a while since I've done either. So I decided to pull this forward in my rotation a bit, and show you a comparison of 8 green fleck-finish polishes that I own. :)

Here is the bottle shot for the first 5:


I wanted to do with comparison initially because I suspected Hard Candy Crush On Ivy and Zoya Rikki might be dupes, so I wanted to put these two together; can you guess which two they are, lol?:


From left to right we have:

As best I can tell, Zoya Rikki and Hard Candy Crush on Ivy are not quite dupes, but they're close; they both sage green but Rikki has gold flecks in it that Crush On Ivy don't have, and I love that (Rikki also has a slightly better formula, imo). But, they're close enough that if you have one, you can easily skip the other.

As for the other polishes, Brash's Sergeant Khaki is true to its name and has a much deeper, more olive color, while Ivanka is a brighter, more grass-green polish. SK has a wonderful formula and is a one coater; did I mention it was only $2.99 at Payless Shoe Source? They have a whole line of polishes there, and I never had a clue about that before stumbling on this (actually, a friend I was shopping with noticed them and called me over!). I can't find any information about whether or not they're cruelty-free, which is why I haven't bought anymore--I can't say for sure they aren't, but I can't find anything saying they are, either. 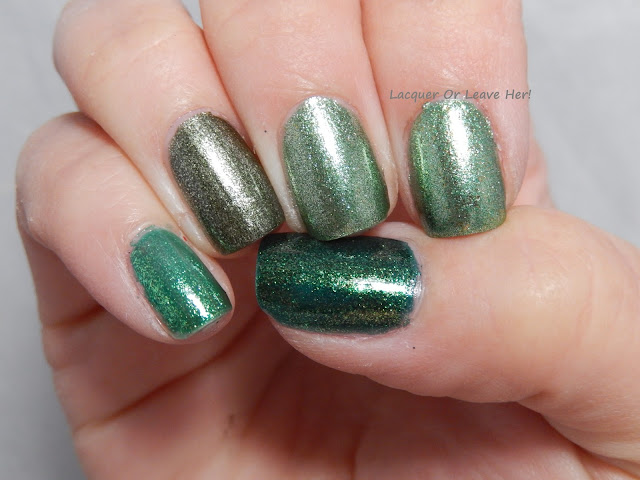 On my thumb I have Zoya Logan, which is a more forest green with subtle gold flecks. This was from their holiday collection and is certainly a pretty, Christmassy green. The color is so rich, it actually washed out the other colors in the picture. I love love love the play of yellow-gold and green in this polish. :)

To continue on the comparison over both hands so you can see how they all compare to one another, I swatched Zoya Rikki on the pinkie of my other hand, then put on the final three polishes. Here is the bottle shot first:

Here they are on the nail:

From left to right:

Zoya Apple turns out to be well named, as it's a pretty green-apple color; the formula on this was very thin and with two coats it was still patchy and needed a third; this is really the only one of the bunch I probably wouldn't buy again. Zoya Meg had no such problem--her formula was wonderful and she was nearly a one-coater. Her brand of green is more of the lime persuasion, and I could look at that color all day ::sigh::. Finally, Julep Etta is an almost yellow avocado sort of green; she also had a good formula.

And that concludes my first comparison/dupe combination post! I hope it was helpful. What are your favorites? And which color/finish would you like to see me compare next?