It's no secret I live for duochrome polishes. When I first entered into the world of the polish obsessed, the only truly beautiful duochromes were made in the other hemisphere, and I did a lot of long-distance jewelry. The polish world has changed a lot since then, and the most recent addition to my duochrome madness is MoYou London's duochrome stamping polishes.

I rarely make videos of anything other than nail plates, but was so excited about these, I couldn't help myself:


Okay, so! Let's take a look at these beauties. They come in these nice boxes, so if you like to keep your polishes all organized and looking chic, you'll love this: 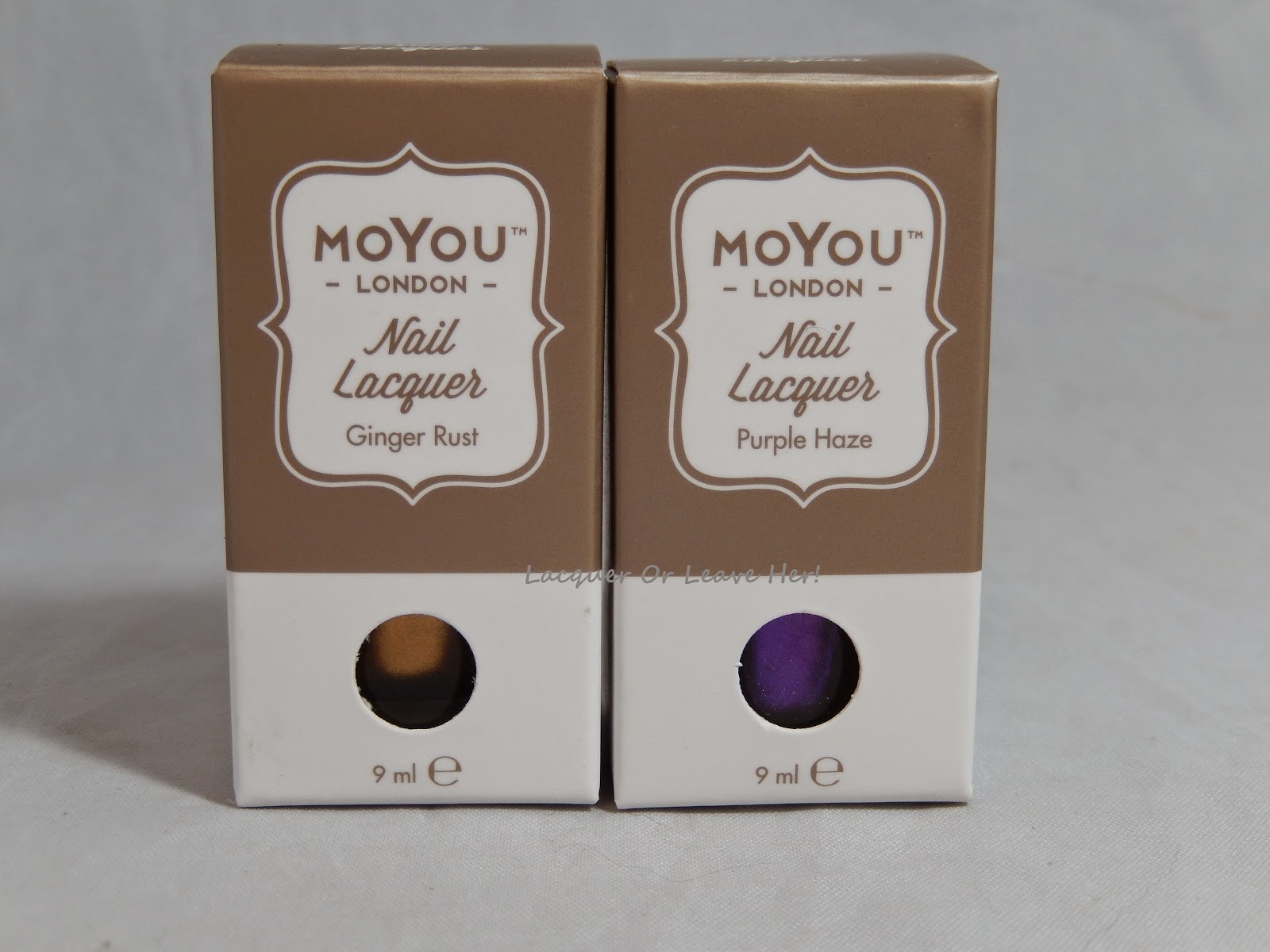 The two they sent me are Ginger Rust, which has a gold-to-green shift similar to the lovely Chanel Peridot, and Purple Haze, which has a purple-to-copper shift with a little pink thrown in for good measure:


I'll admit, I was a bit skeptical when I first saw these polishes; I didn't have any doubt that they'd stamp over dark colors but in the past I've seen these sorts of pigments fade to nothing over lighter colors. So I tested them out over both for you.

Both of the polishes had a good consistency for stamping--thick enough to work with easily, but not so thick you feel like you're dealing with sludge. When I first put the polish on the plate, it seemed a bit sheer, but that turned out not to be a problem, as you'll see. But unlike polishes that you paint your nails with, let's face it, formula really isn't a make-or-break thing--what matters is how the polishes stamp. So let's take a look...

First, let's do Ginger Rust (I used MoYou London Geek plates 05 and 06 for these tests):


Ginger Rust had no problem whatsoever showing its shift over white; from gold to copper to green, the full range is there, in full stamping glory. Absolutely gorgeous. I also love that the polish gives two slightly different looks over the two colors, more like rich molten metal over the black, and more like cool delicate chains over white.


Does Purple Haze live up to this standard?


Purple Haze also stamps beautifully over both white and black. And there's a more noticeable difference in how it shows up over the two--over white, the shift goes more directly from purple to copper, while over black, the shift is more purple-to-pink. I love the fun possibilities here for exploring how this plays with different base polishes...

...In fact, I was so intrigued that I decided to use this in my sample mani, over a medium-ish color. I chose Zoya Leslie (I'll be reviewing this for you shortly), a lovely lavender shimmer, and I stamped with MoYou London Kitty 14:

Yep, you just can't argue with that--strong shift from purple to copper even when the nails are on the same plane. Of course, I do have fairly curvy nails, and this is one time when that turns out to be a great thing, the duochrome shows off so well!

I highly recommend these polishes. A little goes a long way, and the effect is stunning. If you love duochromes and you love to stamp, these polishes are a must for you. You can find them on MoYou London's site, along with their dazzling array of stamping plates.