For week 5 of the 'Let It Snow' challenge, the prompt is 'New Year's'. So today I have a New Year's mani, probably the one I'll actually be wearing on New Year's Eve.

From the moment I saw China Glaze's Champagne Bubbles, I loved it because I thought it really did look like champagne with bubbles in it, and I knew I wanted to do a New Year's Eve manicure with it. I wasn't sure exactly what I wanted to do with it, but I knew that polish was going to be champagne somehow.

I decided to turn the nail beds into champagne flutes by putting 'clear' iridescent glequins around the edges, to make the cupped portion of the flute. Then I stamped some extra bubbles on to represent the stream of bubbles that come up from the bottom of the champagne. I stamped this using Pure Ice Silver Mercedes and Magno Nails plate O:

I'm pretty happy with how it came out. You can see the little glitters in the base polish, and they do look like little bubbles. I think if I were to do it again, I'd either place the glequins end-to-end, or do a double layer of them so it looks a bit more like a solid piece of glass. But, it's pretty and it catches the light, especially in person, and has just that pretty bit of New Year's bling. :)

Happy New Year to you and yours! Please check out the other New Year's manis, linked below. :)

The other day I hit up the year-end clearance sale at Sally Beauty, and was delighted to find a couple of the Sally Girl snowmen polishes red-tagged. I picked up 'Sparkle', an iridescent topper, and 'Glitter', a red glitter. As I was staring at it, I couldn't help but wonder how close it was to China Glaze's Ruby Pumps, so I decided to do a comparison post on it. Here they are in the bottle:

Here are two coats of Ruby Pumps and Sally Girl 'Glitter' snowman; each color is on two fingers (I'll say which at the end). Can you tell them apart?

What do you think? I call DUPE. I personally can't tell the difference in these pictures, nor could I tell a difference in real life...with one exception. The formula on these do differ; 'Glitter' dries a bit more gritty, and it took two coats of topcoat to smooth it out and make it look like Ruby Pumps did with one coat of topcoat. So while the final look is the same, it did take extra topcoat to get it like that.

So should you own them both? There's no reason to, unless you like having the cute little snowman bottle (no judgment from me, I think it's pretty darned cute!).

Which one should you buy, if you don't have either yet? In my opinion, I'd probably go for the China Glaze, so I wouldn't have to worry about the extra layer of topcoat. But, that depends on where you get your China Glaze, as prices vary, if you can find the snowmen on sale, and how pricey your topcoat is. I use a fairly expensive topcoat (Seche Vite) since I do a lot of stamping and nail art, so for me the savings isn't really there.

So for all you out there who will be making that dash to Sally Beauty and might be choosing between these polishes, I hope this helped out a bit. :)

(Oh, and btw--the Ruby Pumps was on the index and middle fingers. :) )

Today I'm gonna show you some polishes from Laquerlicious, an indie brand that I just found recently. While it was a Christmas polish that caught my eye originally, this review is not going to be a Christmas review, but rather a general review that includes a selection of her polishes; she has a very eclectic range of glitters to choose from.

First up is Washed Denim, a cool blend of different shapes and sizes of teal, black, and white glitters in a clear base. The shapes include diamonds, hexes, circles, squares--the different shapes distinguish this from other similar polishes of the blue-black-white sort, and makes it special with more visual interest. I've layered two thin coats of the polish here over China Glaze Def Defying: 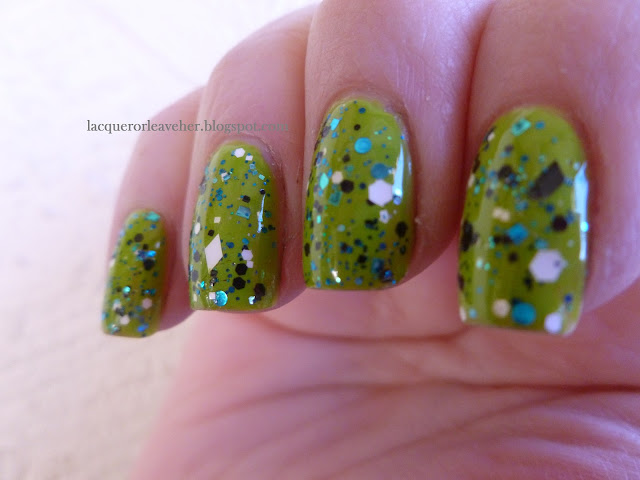 The formula on this was excellent. I didn't have to do any real placement, just natural shifting as I applied. She shows the polish over blue on her site, which you can see by clicking here, and I like how it pops out even over a similar color.


Next is Christmas Morning, the polish that originally attracted me to Laquerlicious, so you know already that I'm going to love it, lol. Christmas Morning is just like Christmas morning with all that torn wrapping paper--covered in shreds of holiday color. There are red, green, white, silver and gold shreds of various sizes in a lightly milky base, which also gives it a confetti-ish look. Here is first one coat, then two, layered over Butter London The Full Monty:

Because I layered this over a gold, it's hard to see the gold shreds with only one coat, but it's much easier to see in this picture with two coats (the light was cooperating a little more, too, lol):


The formula on this is perfect. I was mindful of how much glitter was coming off while I brushed it on, but didn't need to dab--there is an even suspension and it all goes on beautifully. I was absolutely thrilled with this polish--it did what I was hoping and more. I wore this on Christmas morning (go figure) over silver, and couldn't stop looking at it over silver or over gold. She also shows it over white on her site, which plays up its milky base and makes the red and green stand out more, which you can see here. If you want this polish, don't wait--it's discontinued and she only has 4 left. BUT: it's on sale for $6.50, along with a number of other polishes.


Next to show you is Zebra Kisses, a beautiful black and white shred in a clear base. I love shreds and I love the versatility of black-and-white, and this appeals to me a bit more than the standard cirlce/hex/bar black-and-white glitters out there. Here is two very thin coats over Layla's Softouch Effect 10: Again the formula on this was very easy to work with, and all the shreds laid flat with no problem. I know I'm going to get a ton of use out of not just this polish but this particular combination, because I'm a huge San Jose Sharks fan, and this is their colors. Too bad it looks like there won't be any hockey this season...ah well, there's always next year. :)


Next up is Fall Back, a really fun blend of small glitters in a light brown-ish base. This is a fall polish because oranges and browns predominate, but it's got its own personality--it contains a healthy amount of purples and blues as well. When worn in several coats on its own, it has a duochrome base with a subtle color shift, which you can see on her site here; because she highlighted that on her site, I wanted to show this as a layering glitter. I think it's more versatile than it first looks, and I've layered it over two colors here, first two coats of Fall Back over Ulta Army Of 1, and then one coat of Fall Back over Julep Georgia: 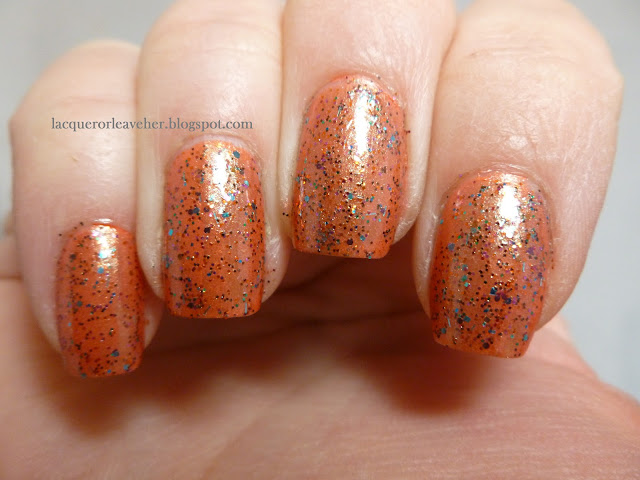 The formula on this was beautiful--it went on as easily as a non-glitter polish. I personally think that over the peachy color, this could be a fun summer or even spring mani. But then, I'm a bit non-traditional with my colors, lol. This is another limited edition that she won't be making  more of, and as of this posting, she has only 3 available, so if you like it, go grab it! Luckily it also is one of the sale polishes for $6.50. :)


And to end, we have Queen Crown, a clear-based polish with silver shimmer and shreds, and pink and purple hexes and shreds, all with a holographic component. I put two-ish coats over Pure Ice Twinkle, a pretty coral:

This polish was hard to capture on film because it's so sparkly and complex, especially with holographic thrown into the mix. It has a fairy princess quality to it that I think the girl that lives inside most women loves to put on now and then (or every day, even!). It makes me want to put on a beautiful gown and a tiara, and I couldn't stop looking at it.

The formula was good, although I personally tend to be a bit challenge when it comes to layering shimmery glitters like this--I tend to have to be very careful to get it to the edges and to not have bald spots...but that isn't a fault of the glitter per se, just one of my personal glitter challenges. It is unquestionably worth the little bit of extra effort I had to put into it to make it even.

So there you have them, 5 beautiful polishes from Laquerlicious! You can find her shop by clicking here. Her polishes are 3-free, and normally sell for $8.50, but she has a number of them on sale right now for $6.50. In fact, I should probably go get a few more...

Thanks so much for reading!

(Christmas Morning and Fall Back were purchased with my own money. The other polishes were provided for an honest review.)

Today is the final prompt of the CNT Winter Holiday Challenge, and the prompt is New Year's Eve.

I bought Jindie Nails Monstar back in October when I picked up some of her other polishes; I thought it was a cool Halloween polish with a twist. But, I also thought it would make a great confetti polish for New Year's Eve. I love the poppers that have streamers that come out when you pop them at midnight, and this glitter reminds me of that--the bar glitters remind me of the streamers and the other glitters look like the confetti.

For the New Year's mani I layered it over Sally Hansen Lustre Firefly:

I think it's pretty darn festive! What do you think?

Thanks for looking, and please check out the other manicures linked below. :)

Today I have a review for you of the new Gals Fairy set of stamping plates by Cheeky. :)

I'll be showing you stills of the plates and reviewing them here; if you'd prefer to see them in video form, you can see the video I did by clicking here. :)

There are 25 plates in this set. So let me get right to it and show you the stills; I'll talk more after that:


So what do I think of the set? I really like it, in fact, I like it better than the summer set Cheeky released. I think the variety of designs is good, with some elegant images, some whimsical images, and some basic images. If you like your plates a little more on the 'cutesy' side, take a look at the Princess set, you might like that more. I found this set more appealing to my personal taste. :)

In terms of size, these are a titch bigger than Konad, but not as big as the plates like Drikk or LeaLac, so if you have longer or wider nails than average, you may have issues with them, and should keep that in mind. They did make the full-nail images with a half-moon shape at the bottom so you can adapt them that way if you like, to fit longer nails.

I'm really happy with these plates and the price is certainly right at $14.99 (at the time of this posting). I got my set from Amazon (click here); if you're a Prime member, you can currently get these with free two-day shipping.

(The products in this review were purchased with my own money.)