(Press sample and affiliate links ahead!)


Since these things are always easier to figure out how to use when you see someone using them, I put together a video playing with a few techniques:


Okay, so let's take a closer look. The kit comes with three stencils and a texture plate:


Stencil 1--Weaves and houndstooth and geometrics:

Stencil 2--Webs and stones and butterflies and such:

And here's the texture plate, filled with scribbles and dots and hashes and crackles:

And here's a quick shot with a ruler if you want clarity on size: 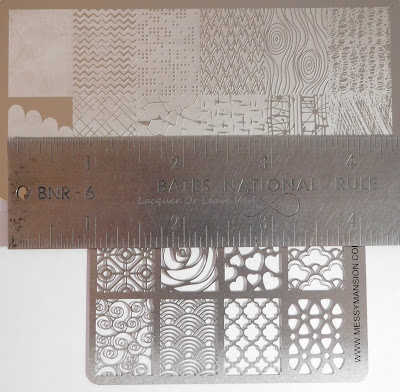 So the idea here is that you use the texture plate just like any other stamping plate (and you can use it by itself, in fact), but you place one of the stencils over it, and pick up with your stamper through the stencil. This allows you to get the pattern from the texture plate in the shape of the template--like an easy version of double-stamping:


Lots of shapes and textures to choose from--so how do you use them?? Let's take a look.

The basic idea is to get a texture from the plate in the shape of your stencil. Here's how you do that:

1) Apply your polish to the texture image you want.

This is exactly how you'd interact with any other plate, except I recommend being generous with the polish, especially at first. In the graphic I'm using Messy Mansion Blue You A Kiss.

2) Scrape the polish off your image.

How hard you scrape will change the type of image you get--I'll show you what I mean in a sample mani below. I recommend a gentle scrape when you're first starting, and you can vary it from there.

Also, from this point on, you're gonna want to move fairly fast. We're not talking Flash fast, but don't dawdle.

3) Lay the stencil over the scraped image.

Place the stencil according to the direction you want for the texture.

Roll/press?? What does that mean? I've found that some of the stencils pick up perfectly with just a gentle roll, but the more intricate ones require more of a pushing-down motion. Also, how firmly your roll/push will change the type of image you get (more about this below), so play around with different combinations. For all of the techniques in the post, Messy Mansion and I recommend XL sticky stampers for picking up your images.

Here are some of the other combinations I tried out: 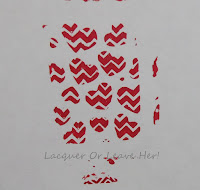 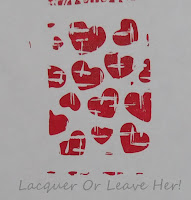 Hearts + chevrons and hearts + hashes: in both of these cases, I used a medium roll (and Messy Mansion Red-y Or Not). 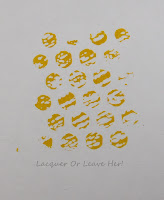 Working with other plates


So hey, can you use these stencils with other plates? Yes, yes you can! But there's a trick to it.


Notice how all of the images on the texture plate have large areas where your stamping polish shows? I normally call images like this, where the stamping polish is going to show more than the base polish, 'negative space' images. These images are going to be best for use with the stencils, because large areas of stamping polish allow your stencil shapes to be fully defined. By this I mean, notice how my hearts above are clearly heart-shaped? That's because there was plenty of stamping-polish space on the texture plate.


To see what I mean, take a look at the texture plate vs. the regular stamping plate below:


See how the texture plate has large ares of lighter color, while the image where my finger is has large areas of darker color? You want to look for images that have a lot of lighter color showing--for example, the star image on the far bottom left might work because of all the light space.


I tried this out with two other plates. The first was Messy Mansion's Symetrika SY04; I stamped the hearts over the diamond-and-chevron image on the plate, and it worked beautifully: 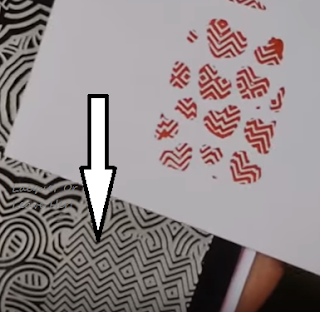 I noticed a pretty huge 'negative space' image on Messy Mansion Tristaenia TR01, so I tried two stencils out on it: 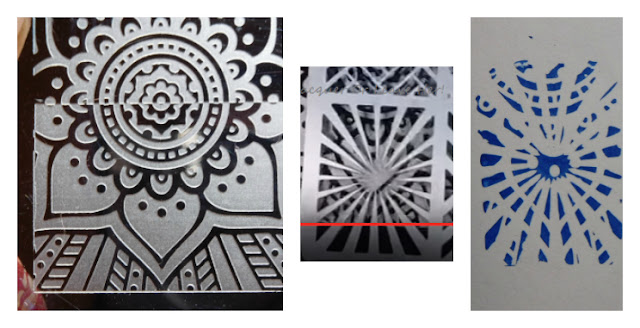 Both of these gave a beautiful batik-type look that I just love. So yes! Pull out those other plates and have a blast!


But see, the basic technique is nice and all, and I'll use it a lot, but that's only the beginning of the fun. Messy Mansion also designed this set to give great 'grunge' looks with what I'm going to call the 'second-pull' technique, because after you pull our first image off, you go over the polish again with a second stamper. Sound weird? Let's check it out.


You can do this with any image on the texture plate, but there's an 'empty' space on the plate designed especially for this effect--it looks just like an empty rectangle on the upper left of the plate. You'll need two stampers for this technique, and they recommend sticky XL stampers. So here's what you do:

1) Apply polish onto the 'empty' space.

Again, I recommend being generous.

1.5) Optional step: scrape the excess polish off the plate.

I say this is optional because don't have to scrape--you'll get different effects depending on whether you do or don't, so play around and see which you like.

2) Put your stencil into place over the polish.

Again, you're gonna want to work quickly once you scrape. You're doing two stamping passes here, so I'd say go ahead and do your best impersonation of the Flash for this technique.

3) Roll/press your first stamper over the stencil.

Move quickly. Set the stamper aside; you aren't going to use this image, because you won't have time (you can turn it into a decal later if you want, but for now, we're going for the second image). What you just did was remove polish from the plate, and you left a potentially cool design in the polish that remains behind. So now you're gonna pick up that cool design.

5) Roll/press your second stamper over the polish left on the plate.

Now you have a smooshy gooshy grungy batiky cool texture image like this one! 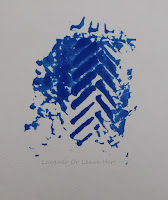 I mentioned you can use this technique on any of the texture designs, not just on the 'empty' rectangle. I tried that out with a few of the images I showed above--here is what the 'after images' looked like: 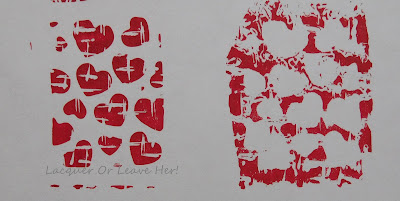 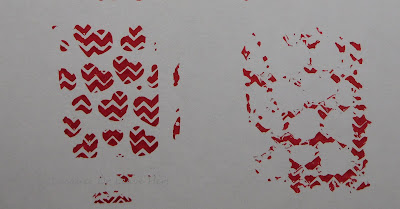 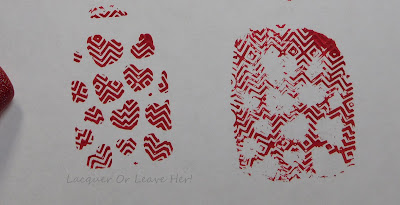 Imagine these stamped as background texture over pink base polish, with another design stamped on top...And also remember, I took the time to stamp my first image, so the second pull wasn't a clean as it would have been if I'd just focused on that image. So again, play around and see what you come up with.


Okay, so we've seen two techniques that Messy Mansion recommends; now let's take a look at some madness I played around with on my own, that I'm calling the 'Smoosh-and-pull' technique...


One thing that jumped out at me when I saw the 'empty' space on the plate was how you could play with polish right on it like a palette. Normally if you use multiple colors of polish on your plate, when you scrape, those colors are going to form stripes across your image. But because you don't have to scrape on the 'empty' palette space, you can work some magic:


1) Dab your polishes onto the palette.

For this I used Messy Mansion Blue You A Kiss, Lilac, and Dogwood Pink.

2) Smoosh the colors together with a stamper--any type of stamper will do.

I used a crystal stamper so I could see the effect as I was smooshing.

3) Place your stencil over your smooshed polish.

4) Roll/press your XL sticky stamper over the stencil.

Now, you can stop here if you want, use this image, which should be in the shape of your template. Or, you can continue on with the 'second-pull' technique...

6) Roll/press a second XL sticky stamper over the stencil.

Check out this beauty--gorgeous as background or just on its own: 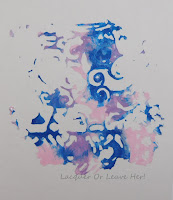 Here are a few other designs I did with this technique: 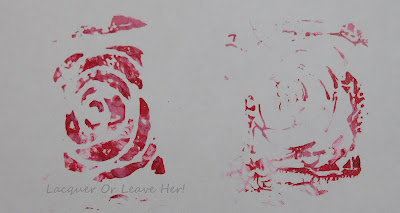 Polishes: Red-y Or Not, Petal. This was my first attempt, and I wasn't good at moving fast, so my second pull was very skeletal, and beautiful in its own right! 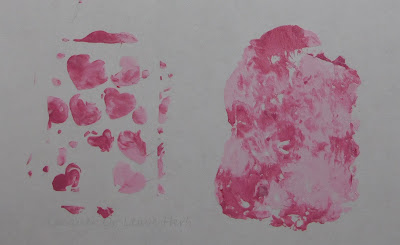 Polishes: Petal, Dogwood Pink. I used a ton of polish, a very gentle first pull, and worked super fast, so you can barely see the hearts in the second pull. 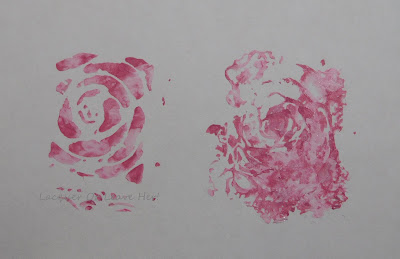 Polishes: Petal, Dogwood pink. I used a medium pull on this one, and I LOVE how both of these pulls turned out. Gorgeous.


So, this is all well and good, but how does this translate to the nail? I did two manicures to test drive some looks for you. :)


For the first I went simple. I started with a base of Zoya Mallory. I combined the houndstooth stencil with the dot texture, and stamped using Messy Mansion Chalk and Hydrangea Blue:


I call this 'zombie houndstooth' because it looks the way I think your cute houndstooth skirt would look after you'd been dodging zombies in the apocalypse for a while...!!


For my second look, I went a little more complex; I also wanted to show you how the looks vary depending on how hard you scrape the plate.

I started with a base of Zoya August. I combined the hexagons with the slashed texture image, and stamped with Messy Mansion Hydrangea Blue; I used this as a background pattern. I stamped over it with images from Messy Mansion MM18, using Messy Mansion Blue You A Kiss, Carbon, and Banana Bender:

Notice the difference in the background texture from the index finger to the pinky--the index finger has the firmest scrape, while the pinky has the gentlest scrape (you can see it almost didn't show any texture). The thumb has the same pressure as the ring finger, to show you that since the ring finger is mostly covered. So vary your scrape and your pressure and see what you come up with.


So what do I think about the Messy Mansion stencil kit? I feel like a kid playing in a pile of art supplies--there is so much to play around with combining textures and shapes, pulling out different plates, and playing around with your polish on that 'empty' palette space--tons of fun and potential. I can't wait for them to come out with more stencils and more texture plates!! So. Much. Awesome.


You can find all of these products in Messy Mansion's store; I've also included links in the post to the ones you can find on Amazon, in case that's easier for you. You should also check out Messy Mansion's YouTube channel--they have videos using this kit and their other products.