Tutorial: Aligning those stamps (and twin post for Cheeky 53!)

A few days ago when I posted my 'Stamping 102' post, I had a question about proper alignment, getting the same look on all of your nails. I answered the question, but I think a more complete answer with some pictures might help. So I'm going to show you two methods for getting your stamped image where you want it. Both methods can be used for any alignment but I personally think the first method is better if you're trying to get a similar look on all your nails, and the second is better for placing individual images. :)

So first let's assume you're trying to get an image placed in the same way on all of your nails. I've decided to use the pretty bird-and-letter image from Cheeky plate 53 as my example:

Paint, scrape and pick up the image on your stamper. I'm using Barry M Silver Foil. :)


Step 1) Pick your starting points. Pick a portion of the edge of the image to use as your 'anchor point'. You'll be using this same part of the image to orient the stamping on each of your nails. Also, pick the height on the edge of your nail that you will be using. For this manicure, I want the central bird to be in the center of my nail vertically (from side to side) and just a bit above the midpoint of my nail horizontally (between cuticle bed and nail tip). So I chose the envelope as my anchor point, and decided to place it halfway up the edge of each nail (see figure 3), so I will be able to control my horizontal alignment (how far up the nail the image is):

Step 2) Check vertical alignment. So far so good. However, each of your nails is likely to be a somewhat different width. So, if I am trying to get the bird centered on each nail, and I start that envelope anchor exactly on the edge of each nail, the bird will go farther over on some nails than others, and we don't want that. In figure 4, I've drawn two black lines on the stamped image for illustration purposes: for my biggest nail, maybe I'll need to start at the right black line in figure 4, but for my smaller pinkie nail I need to start further into the image, at the left black line. To be clear: for a full-nail image you will always start transferring the image at the very edge of the nail--the questions is, how far into the image do I want to place the edge of my nail in order to start transferring the image?

To figure out where on the image I need to start, I put the stamper close to my nail (see figure 5) and see if the bird will roll onto the correct place if I start at the very edge of the stamp. If it won't, I move the stamped image over a bit, and match it up to the edge further into the image:


Step 3) Roll that sucker!
Step 4) Repeat the process for the other nails you want stamped. And then you're done:


Notice how on the pinkie, you can only see the very end of my envelope 'anchor', but on my index finger, you can see almost the whole thing; this reflects (approximately) the black lines I drew in figure 4 to show the different initial starting points for transfer. :)

Next on to method 2. I think this is an easier method when you want to place a smaller image, or if you only want to stamp a full-nail image on one nail but want to be precise about where you're placing a given part of the image. This is because it's a little harder to keep 360-degree control of a full-nail image with this method.

For this manicure, I'm going to do a skittle sort of manicure, and I want to make sure that the pretty birdie is is placed in the center of my nail.

Step 1) Place/pick yor 'anchor'. Place a teeeeeny dot of polish for your 'anchor' where you want your image to go (figure 7). A couple of things to note here. I've put a fairly big dot on so that it would photograph well--you want to make it as small as possible, so it's not visible after you stamp on it (notice in figure 9 that you can still see the dot in the center of the bird). Also, note that I have glitter polish on; it would be much smarter for me to just pick a piece of glitter right where I want the bird to go, and use that as my anchor, so I don't risk a dot of polish showing. But that would be hard to show you in pictures. :)


Step 2) Position your stamper. Bring your stamper up to your nail, and move it carefully against your finger until it lines up so that the bird will cover the dot of polish (or your chosen piece of glitter).


Step 3) Roll that sucker!
Step 4) Repeat as needed with other images or nails.


There you have it! Honestly, after you do this a couple of times, you won't need to consciously pick an anchor or put a dot of polish--you'll be able to eyeball it pretty well without worrying about it, and will probably automatically be using some portion of the design for an 'anchor' reference without thinking about it. It seems a lot harder when I'm describing it here than it really is--after a few times, it will be easier and easier. :)


So what did I do with that one stamped finger to turn it into a manicure? Well, this coming week my twin post with Dina of Secretary's Nail Art is using the word image from the same plate, so I figured I'd combine it with this post. I stamped that image on my ring finger, and then added some 3D heart sequins to finish off the look--and after I applied topcoat, you couldn't really see the dot of polish under my bird too much (but don't rely on this, lol!)

Btw, the base polish in all of these pictures is a bit of a mongrel that evolved in a strange way...It started out as a base of Finger Paints Isty Bitsy Spider, then had a coat of Windestine Kizuna over it (I'm in the process or reviewing that for you) and finally I put on a coat of LynBDesigns' I Do Not Like Them Sam I Am, just playing around. I liked how it ended up, so I decided to use it for this. But that's why it's a bit...odd, and doesn't really accurately portray any of the polishes.

And of course  I put the two methods into two tutorial images in case that's easier for you to reference. :) 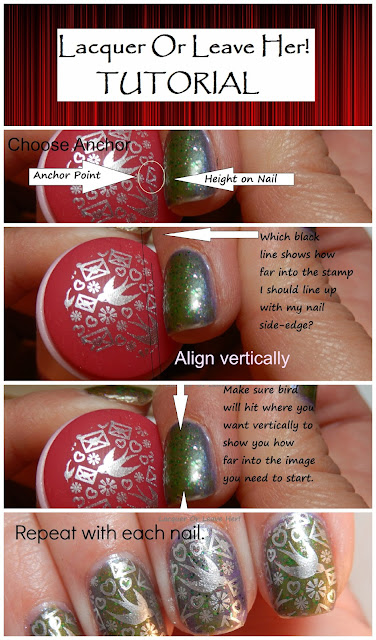 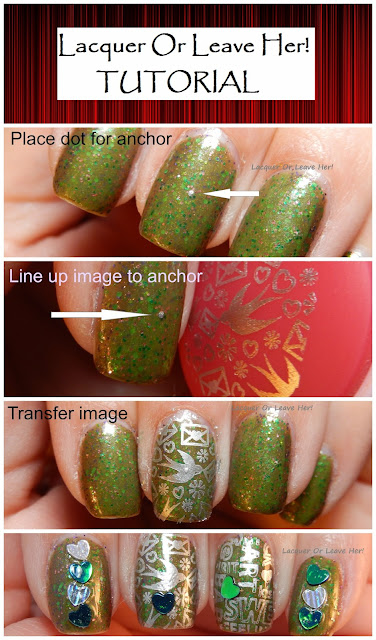 I hope this has been helpful for you! If there is anything you'd like me to clear up, please let me know...Thanks for reading, and big hugs and smooches. :)
M.