Today I have a review for you of 4 of Hot Topic's Blackheart Beauty polishes (you can find these polishes here). I know at least one of these is new (Beautiful Revenge), but read somewhere that several are new, so I'm not quite sure how many are or are not. What I do know is that when I went to buy these, I couldn't find any swatches online to help me choose, so I thought I'd review and do mini-swatches for you here of the 4 colors I bought, in case that helps someone decide to buy or not. While I certainly wanted more, I had to limit myself to 4 for budget reasons...sigh. I need to just win the lottery already so I can have all da pretty polishes!!

UPDATE: I have been informed that these polishes contain lead. While it seems that this is probably in trace amounts such that it doesn't need to be disclosed in most states, it does contain some, and you should be careful to not bite your nails or put your fingers in your mouth while wearing polishes from this line.

Here are the ones I got:

I know that packaging isn't supposed to matter, it's the polish inside that counts. I know it. But SERIOUSLY--How awesome are these skull bottles?!!?!!111111?

Okay, now that I've gotten that out of my system, let's move on the the actual polish. First up is Violet Tendencies:

Violet Tendencies is a blue-purple duochrome filled with glass-flecked magical goodness. When I saw this online, I thought it was a small glitter, but no, it's glass flecks and it could not be more gorgeous. For once, I was able to photograph a purple without doing handstands, and I'm so glad because this picture really speaks for itself. When I went to swatch it, I was afraid it would be too much like some other colors I have, but it stays true to the colors you see in the bottle and isn't like anything else on my swatch wheels. Not Galaxy Girl, not Mysterious Curse, nothing. This is two coats, and as you can see, it covered well and without fuss. And, believe it or not, this is with no topcoat. I'm in love love love love love. This polish simply makes me happy.

Next up, Creep Show:


When I saw this online, I thought it was a run-of-the-mill glow in the dark polish and I've always wanted one of those, so I grabbed it. But when I opened up my package, I was very pleasantly surprised to find out that it has a generous sprinkle of glitter in it! For me, that makes it wearable even if it doesn't glow in the dark. This applied well, but did have two downsides. As you can see, it goes on a little more yellow than it looks in the bottle. Possibly this could be fixed with a coat of white polish under it? Also, it's more sheer than I would like--this is three coats, and as you can see, the nail line is still clearly visible (also could be fixed with a white undercoat). This swatch is without topcoat.

UPDATE: I had a request to swatch this with a white undercoat. Here is the result, with two coats of Creep Show and no topcoat over one coat of Sally Hansen Xtreme's White On. This definitely gets rid of the VNL, but the polish still seems to be a bit lighter/yellower than it shows in the bottle, just not as much (hmmm...I wonder what that says about my nails!!):

Ah, Beautiful Revenge. Now that's the sort of name I expect for a goth red-glitter-in-a-black-jelly-base polish (sorry, Spoiled, I still don't get the name 'Ants In Your Pants'). This is two coats, and covers completely, although the color was a bit thin near my cuticles--probably the fault of my application--so you can definitely wear it on its own. The glitter does sit in the base a bit, so it has a more matte-ish look than a super-sparkly glitter look (see sunlight picture)--not that this is bad, it's just a different type of look. The finish doesn't dry super shiny, which is a great option if you're going for a more dark type of look. And if you want shine, you can always throw on a topcoat (I am not wearing one here).

Speaking of Spoiled's Ants In Your Pants, that just so happens to be right next to this one on my nail wheel, so I thought I'd include a little comparison for you: 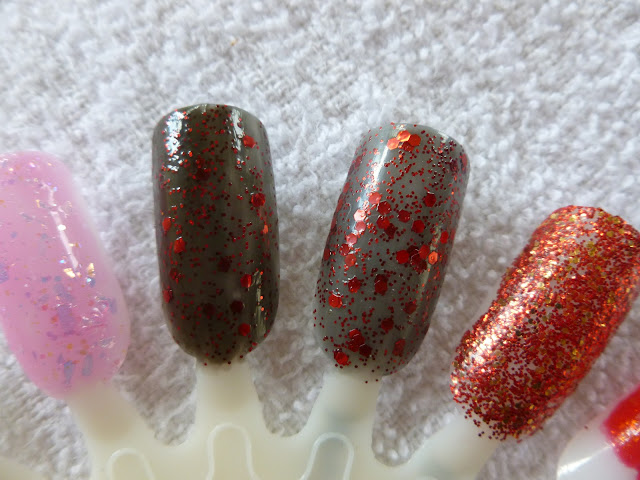 Beautiful Revenge is on the left, Ants In Your Pants is on the right; both have two coats and no topcoat. AIYP does not cover fully in two coats; you might be able to wear it on your own with more, but would have a much higher density of glitter. Which could be exactly what you want, and if so, great! Also, I found AIYP had a bit more of a light-catching sparkle (probably exactly because of having less black base), and went a little more to the orange side with the sparkle. So it's just a question of what look you're going for, and whether you want to wear it alone or over something. They are similar, but certainly are not dupes.

And last but definitely not least--Deceit!

If you've been following my blog, you may think it's odd that I bought this, because it's pink, and I don't really care for pink. I was really taken by the glitter in this--I could see flashes of peach, blue, purple, etc. I wasn't sure if that was a trick of the light but figured it was worth a shot to see if it really was that pretty. And, it turned out to be even prettier than I was hoping. In the first swatch, I have two coats of Deceit by itself, no topcoat. It is a multi-color, multi-shaped glitter set in a thick, semi-translucent gel-like base; the glitter shows different colors in different lights. It was hard for me to capture that on film because it changes as you move, but it does show all of the colors that you see in the bottle--don't let the swatches fool you. I suppose you could wear it on its own for a soft look, but it's pretty clearly meant for layering; in the second swatch I did just that, layering one coat of Deceit over two coats of China Glaze's Peachy Keen. Here is a comparison picture of Peachy Keen, on my index finger: 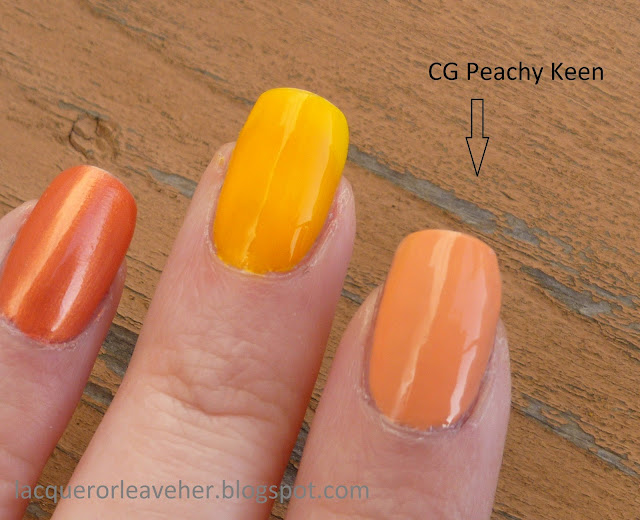 Deceit changes the color of the Peachy Keen very slightly, giving it a more pinkish tinge, but without turning it pink. This is just what I was hoping for, and I can't wait to try it over purples and reds. :)

The formula on all of these was great; no problems, good control, and they seemed to dry fairly quickly even though I didn't use a topcoat.

So there you have 4 colors from the Hot Topics' Blackheart Beauty line--one glass-flecked duochrome, one glow-in-the-dark glitter, one down-and-dirty glitter, and one multi-everything glitter; the collection also contains crackle colors, and colors meant to be used with black-light. I'm very pleased with the ones I got, and will happily buy more in the future.

Hope this helps you decide if these polishes are for you! I'm off to stroke the bottles lovingly...Thanks for reading. :)

(the items in this review were purchased with my own money.)
Posted by M.M. Chouinard at 4:00 AM